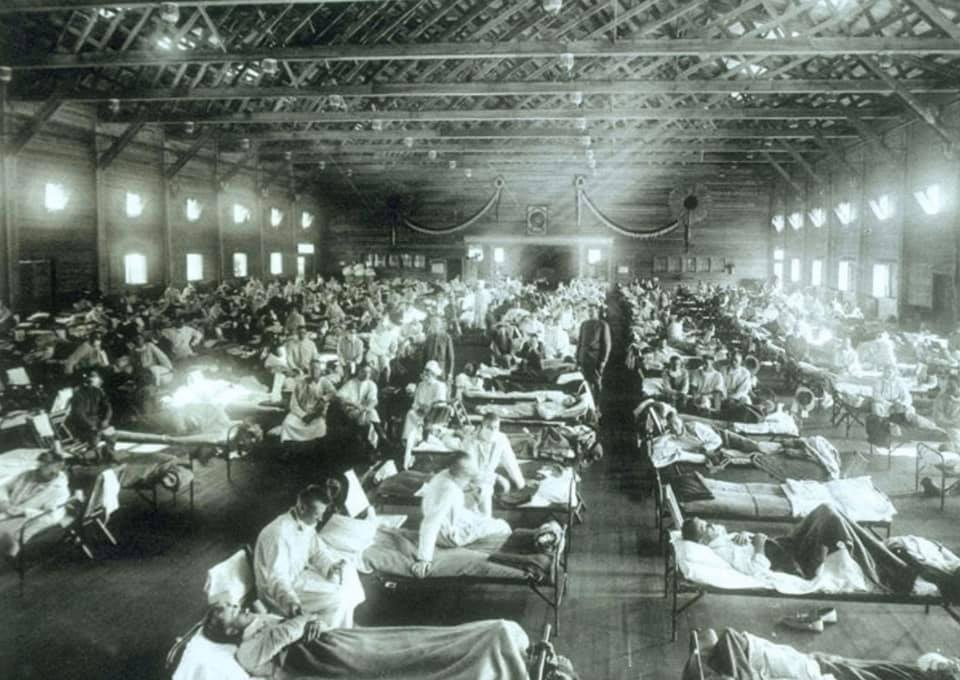 More than a century ago our world faced another pandemic. Millions died of a pneumonia like illness. Although there is not universal consensus regarding where the virus originated, it spread worldwide during 1918-1919. In the United States, it was first identified in military personnel in the spring of 1918. It is estimated that about 50-100 million people or one-third of the world’s population became infected with this virus. It was called the Spanish flu. Somewhat worse than the current pandemic it affected those who were in the prime of their life as well as the very young and the aged. Today researchers think it was similar to H1N1 or Avian flu. The number of deaths were staggering. in the United States was estimated to have killed up to 675,000 people.

During the pandemic, patients treated by medical doctors had very poor outcomes. If you were hospitalized in an MD hospital less than 30 percent survived. At the height of the epidemic nearly 30 percent of the population of the US contracted the disease. For the most part those receiving care from standard medical care of the day had a dismal and ominous outcome. Death was a strong possibility. As many as 4 out of every 100 persons who got the disease died. There was one striking exception.

Chart reviews by the United States Public Health Department beginning in the 1920s found an unexpected and striking fact. The US Public Health Service theorized that because Osteopathic hospitals were smaller and Osteopaths were believed to be less well trained than medical doctors mortality rates of Osteopathic patients would be much higher. The statistics showed something very different.

During the 1918-19 those treated by Osteopaths had a dramatic increased survival rate. In 1918, in terms of pandemic-related complications such as pneumonia, 3 times as many patients died receiving conventional medical treatment than those receiving osteopathic treatment. In a review of 100,000 cases treated by Osteopaths, patients who received conventional medical treatment had a death rate 40 times higher than those who received osteopathic care.

In 1918 with burgeoning cases of Spanish Flu and a mortality rate greater than 3%, the American School of Osteopathy, now the Kirksville College of Osteopathic Medicine in Kirksville, Mo, contacted all their alumni by telephone, telegraph and certified mail to enlist in a nation-wide effort to treat patients with the Spanish Flu. Dr Andrew Taylor Still, the founder of Osteopathy had reported dramatic success with patients suffering from pneumonia and influenza. The American School of Osteopathy reasoned that those trained in Osteopathy ( many of them trained by Still himself) would have similar successes.This effort culminated in 2445 Osteopaths responding in treating 110,122 patients with influenza, with a resulting case mortality of 0.25%. One of the largest osteopathic medical hospitals, 400-bed Massachusettes Osteopathic Hospital, in Boston, also reported a mortality of 0.25% for that period. The Osteopaths recommended good nutrition, placed patients in sunlight, and performed Osteopathic Manipulation. They emphasized lymphatic techniques. These included thoracic, hepatic, splenic, abdominal and pedal lymphatic pump procedures, as well as rib raising procedures. Other procedures included soft tissue procedures, pectoral traction, mandibular drainage, frontal and maxillary lifts, and diaphragm doming muscle energy techniques that would improve rib cage biomechanics.’’ These techniques would be familiar to most osteopathic practitioners.

With another burgeoning pandemic this very important piece of Osteopathic history is being overlooked. The American Osteopathic Association has failed to inform the American public of the benefits of Osteopathic Manipulation as it has mostly aligned itself with traditional mainstream medicine. For nearly 17 years I worked with Dr Viola Frymann, a living legend in Osteopathy. I wonder what she would have to say about these times? We trained many Osteopaths from Italy one of the hardest hit areas. I think Dr Frymann would say to those Osteopaths to keep safe, use the best precautions, but she would also say … get to work. She would remind them of the Breath of Life and the inherent therapeutic potency and the body’s innate ability to heal itself. She would remind them to use their Osteopathic Hands.
To American Osteopaths, I believe she would say it is time to step up, be involved in helping patients with their Osteopathic hands. She would call for a nationwide effort as her beloved Osteopathic School ATSU previously called the American School of Osteopathy, called for 100 years earlier. She would denounce those who were failing to use their Osteopathic ideas. She would call for a national and international effort by those trained in the methods of AT Still and William G. Sutherland.
ShawnK. Centers DO FACOP
The Children’s HOPE Center